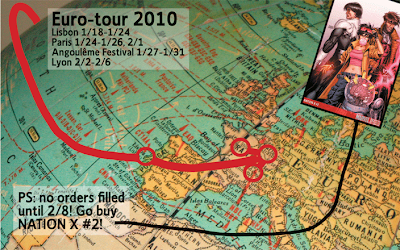 Once again, on my merry way for a pretentious Euro-tour.

I am fortunate that:
1) I work at a place that gives a lot of vacation time;
2) I can sell books when I travel (therefore can afford to go).

This year, I am stopping in Lisbon for my first taste of "warm Europe" then on to France for a healthy dose of BD (comics). I will be posting sketches at some point, hopefully when I get to Lyon. In the meantime, go buy NATION X #2!!!

NOTE: the image here is a photo of my rare 1941 globe. You can see Europe's vastly different from today.
Posted by Tim Fish at 6:06 AM 5 comments: 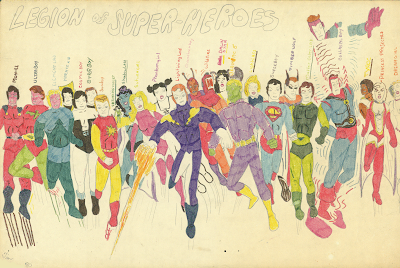 After the outpouring of requests to see old artwork, I have decided to put you out of your misery—or add to it. Late 1979, I started reading random issues of Superboy and the Legion of Super-Heroes, just prior to the series splitting into two books. I was so taken with it, I devoted some indoor recess time in the bitterly cold winter of 1980 to this 12"x 20" pencil and magic marker masterpiece. Bad layout, or latent homosexual tendancies surface as we see Ultra-Boy wacking Mon-El off, Sun Boy wacking himself off, Brainiac 5 wacking Superboy off. Nothing risque for the gals though...but they sure do look angry! Except Light Lass who has her eyes closed...blinking for the camera so to speak. 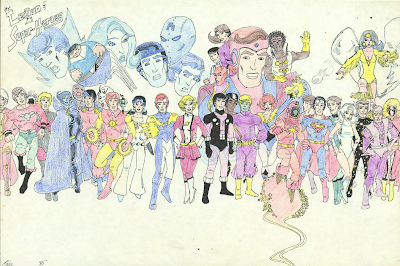 Flash forward to 1985, I was inspired to redraw the piece the week between Christmas and New Year's 1985. A bit better this time around, as I used marker and colored pencil. Overall better layout, and nice effect on the dead Legionnaires hovering above. 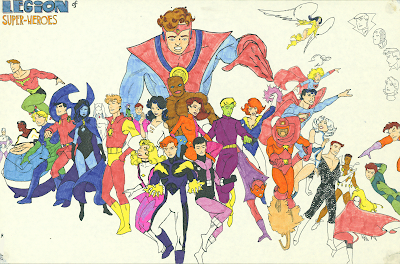 The boys look package-y, but for that matter, so do the gals.
Last time to recraw the image was 1990, for the sake of monitoring my progress. Back to marker coloring, and I was picking and choosing my favorite look and feel of the characters. I chose Element Lad's 70s outfit, and Star Boy's deep V neck version of his uniform. Cosmic Boy playfully tilts his bum while all the gals have significantly been de-sluttified.
Maybe I will redraw this again in 2010.
Posted by Tim Fish at 10:59 AM 8 comments: