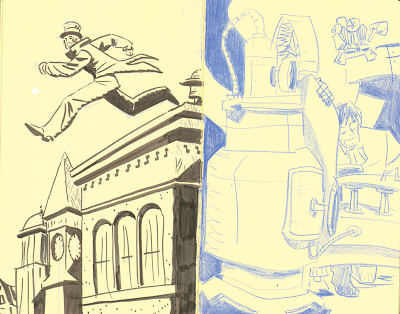 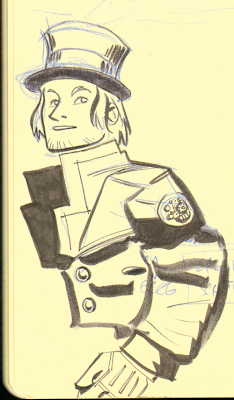 You may recall that I am an Austen fan, and have a thing for well-spoken men in tails.

I've toyed with the idea of an Austen-era gay romance story, and have several scenes and conversations planned out. That's where the journey had stalled out until my recent work with Greg on a sci-fi buddy pitch inspired me to envision a transition of my story to steampunk!

Here's how it goes...intro, flirtations, sexual tension, more sexual tension, and whiz, it's more than you thought. It's a sci-fi story wrapped up in Victorian-era imagery with lots of gay undertones.

The story I am working on with Greg is more of a buddy thing, set in the future, and while there is some serious male bonding between the two principles, they are both so self-aware and living in an anything-goes age, I just don't see any sexual tension.

Once our mini comic is complete and we pitch it around, I will share some details here. Until then, enjoy some steampunk inspired sketches.
Posted by Tim Fish at 9:08 AM 3 comments: 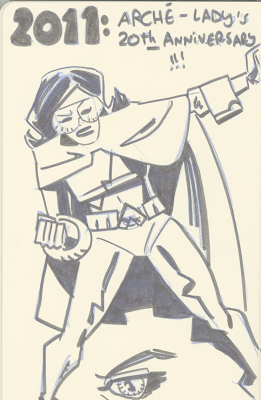 At the recent Small Press Expo, I was talking future comics projects with Greg Lockard and Monica Gallagher. While admitting I had nothing big on the horizon, I noted 2011 will be the 20th anniversary of my Arché-Lady comic. Monica said, “your what comic?” Greg was dumbfounded she didn’t know about the campy character that dominated my output for a full decade…100 episodes worth (plus specials and more) totaling over 1000 pages.

My dear friend Miriam received a pair of shoes for her birthday, which looked like super-hero booties. She asked me to draw a thank you card, and that’s how the character was born (this card later became the first “special”). Initially in 1991, I launched Arché-Lady as a story arc in my mini-comics anthology Ten Minute Cartoons. But in January 1993, she busted into her own series, The New Adventures of Arché-Lady and Astro-Boy. The stories were brief, and light on plot, mostly designed as a series of inside jokes for my friends. But still, I launched story lines with a specific end in mind, thinking, if I stick with this, I’ll wrap it up like so in #100. Queue laugh-tracks. As the stories grew in scale and scope, I changed direction and retitled the series The Adventures of Arché-Lady with episode 51 in 1995. The series was never my “portfolio” work until the late ‘90s when I started to place real effort on both story and art. From episode 76-99, the caliber of each page leaped forward. After a hiatus—and crafting my “I want to take comics really seriously” plan in 2000—my first step was to finish my beloved series. The 100th and final episode brought to conclusion all the story lines exactly as I’d planned to in 1993. In 2001, to commemorate the 10th anniversary of the series, I wrote and drew the 10th “special” which finally revealed Arché-Lady’s secret origin.

Hard to believe—gulp!—20 years have passed since Miriam asked me to draw that thank you card. But it cannot go unobserved. So, investigating digital press options, it’s looking within reason to put together a high-quality two-volume perfect bound collection. Limited run, of course, for the true Fish-philes. It’ll be a huge pre-press project, but perfect way to keep me away from TV. Fortunately, even for the devoted Arché-Lady reader, there will be plenty of exclusive material since I’ll include some rarely-seen stuff like the “Teen Auxiliary” splash pages sans stories I did in 1999, the “Astro-Boy” solo stories from 2001, and the “recap” I did in 2006. Plus who knows what else I will be inspired to do. Maybe I’ll post a few gems from the past on the blog for your amusement, too. Keep your eye out for the pre-order stage…I’m not gonna make many of these babies!
Posted by Tim Fish at 12:50 PM 6 comments:

It's Labor Day weekend, and my annual tradition of producing art for the Wonder Woman Day charity auction!

This is the 5th (and final—bummer!) year of the auction and my 4th entry. In past years, I have done retro-Wondy (two WWII-era drawings, and one '70s-era, all posted here) for the auction benefiting a Portland, Oregon womens' shelter.

My first entry commanded the highest price, ranking among the top sales; I was very honored to "beat out" a number or pro artists who had actually worked on Wondy's book.

Of course, I ultimately (and sheepishly) have sold off color prints of my entries—mostly at the request of some fans.

Being the last year, thanks to Jared's urging, I wanted to do a cover recreation, and immediately looked to a brief period in Wonder Woman history in the '50s when she looked like a bathing beauty, for about a year around issue 100.

After that, startling—despite no change in artistic team—she went from bathing beauty to prison matron. But still, that ugly, ugly era produced some real gems. Such as #125, which offers my inspiration for this year's auction.

I found logos and printed out a blue line grid, and drew my rendition of Amoeba-Man, Mer-Man, and Colonel Steve Trevor fighting over Wonder Woman. The last image is the original cover—hilarious! If you choose to bid on my version, it will look pretty much like the 2nd image: blue line logo and grid, DC/National Comics bullet, CCA logo, blue pencil and ink drawing on 11"x17" Bristol board.

I wasn't sure I'd color this year's, but then I said, "why not?" and here you see image 1. I'll print a handful on 11"x17" photo gloss paper and if you are lucky you can get one at New York Comic Con next month.

Please do check out the auction—it's a great cause! www.WonderWomanMuseum.com 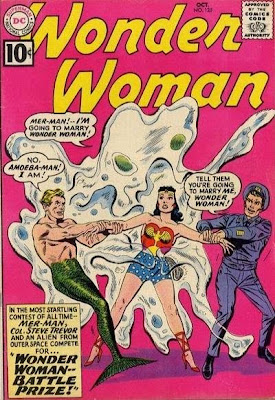 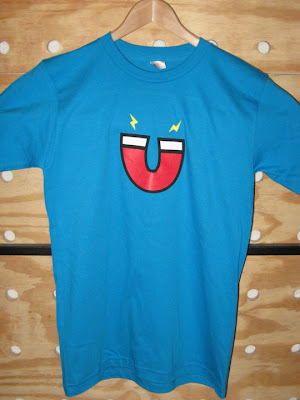 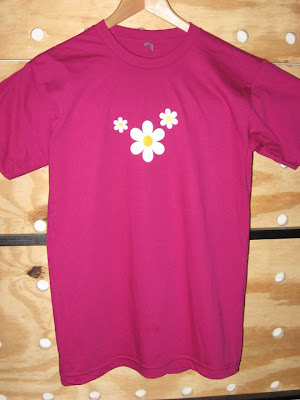 New limited run Ts! Been wanting to do these two for so long! Both shirts have been worn by my comic characters in my stories for many years now. So, you can cosplay all you want. First, "Johnny's Magnet" as seen on characters in I ♥ Marvel, Things Don't Always Suck, and Cavalcade. Next, "Hippy Daisy" as seen in The Faggy Phantom, Strugglers, and Cavalcade. Maybe more, I try to draw them in every story, because I WANT THEM. And now, I have them! And you can, too...

They are on nice American Apparel shirts, mostly available in S and M. There are only a few Ls and 1 XL. Let me know.

I'll try to post pics of me wearing them.

From the gayest corners of the globe—DOC SAVAGE

Greg just passed along DC's DOC SAVAGE trade paperback collection of the comics which appeared in magazine format in the early '70s.

The talent roster was pretty impressive, but the stories...well, hrm, uh, anyway...

Doc Savage was a popular pulp serial from the '30s, and can be regarded as the "first superhero." He is immensely strong from his 2-hour daily workout regimen since childhood, extremely intelligent, and billed as "The Man of Bronze" un-naturally tan.

But best of all, he's shirtless—all the time. Tight riding pants, tall boots, and a skimpy vest is his preferred get-up. Par for the course for the Castro in the '70s but out of place for the '30s. But still pretty sexy. Even when he travels to the extreme north of Canada, he's still shirtless—though he swaps out his skimpy leather vest for a skimpy fur vest. Yes, you read that accurately.

It's not just Doc that's pretty gay. His band of 6 helper men are pretty gay too. They really only develop two of them as characters for the comic, and they have a very old-married-couple or at least Bert and Ernie shtick. Of course, one of them is a fashion plate and carries a sword inside his cane. Ok!

And, from the get-go, his villains look gay too. Enter a band of South American Indians, dressed in some sort of tight snake-skin body suits...covering head to toe. No, I take that back, their entire midriffs are exposed so they can showcase their abs. I'm not joking, buy the book if you don't believe me.

Overall, an amusing read.
Posted by Tim Fish at 8:51 AM 2 comments: