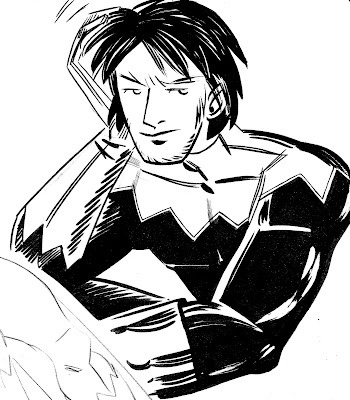 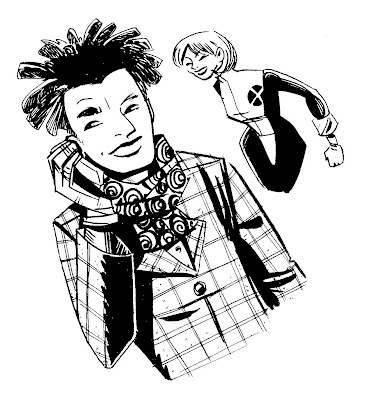 You've read my posts hyping upcoming Marvel gigs, and I am finally ready to admit that, yes, my story in NATION X #2 is the Northstar story!

Long story short, the X-Men now live on an island off the coast of California. One of their members, Northstar, is Canadian. Northstar of course if Marvel's first out super-hero (having come out in 1992) but never had a BF until a few months ago (though I understand for some time he had a roommate that some assumed to be his lover). So the story I was asked to do is about how living on the island is impacting his relationship.

The story was lots of fun to write and draw! I was able to draw some action scenes, and cameos from many X-Men: Cyclops, Storm, Colossus, Psylocke, some New Mutants...and even Dazzler in rollerskates! :-) I'm told the art is my best work to date (yay!).

"The most frightful villain ever—!" 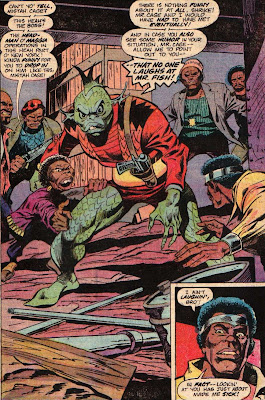 It's always a treat hanging out with Xavier at his place. Any random topic of comics, and Xavier disappears for 60 seconds and hauls out a stack of comics relevant to the conversation. One such conversation was in regard to Luke Cage, the powerful Powerman of Marvel Comics...and his battle with the frightful Mr. Fish.

On the cover, Mr. Fish looked like the Creature from the Black Lagoon or something. On the interior, Mr. Fish was racist depiction of a fish-man. The story was hilarious—it read like one of my old Arche-Lady comics. The easiest solution to avoid plausible details? That's right, have the hero not care about learning them. Like Arche-Lady, when Powerman is posed with questions, "don't you want to hear my origin? Don't you want to know how my blaster knocked you out?" Luke's reply is "no, I don't!"

Mr. Fish had a band of racist sidekicks, including the little guy pictured here from the comic who seems right off the plantation. This issue makes one think "and I can't get work in comics?!?" Golly, even I was writing better stories in 1975 (I was 5)! This villain has only ever appeared once, and not even in the OFFICIAL HANBOOK OF THE MARVEL UNIVERSE.

It took me some time to add my classic explosion (which I painstakingly created in 1997 using Microsoft Word—you read that right...I had time to kill at my day job one day—and employed often in Arche-Lady comics), and color. Thanks to Miriam's hangover and breakfast plans cancellation, you finally get to see my take on Powerman and Mr. Fish.

I still think it would be fun/funny to do an intentionally camp story with these two.
Posted by Tim Fish at 9:50 AM 10 comments:

Let me geek out on you: I've made you well aware of my adoration of France Gall. And while I like her late 60s/early 70s recordings very much, I particularly like the songs she recorded in German during that era.

Many have Beatles-like experimentation in them, with out-there back up vocals (such as "Love, L'amour und Liebe") or odd instrument choices (such as the xylophone in "Ich Singe Meinen Song").

Other favorites include "Computer Nr. 3," "I Like Mozart," "Ich War Ein Kind," and "Unga Katunga."

About half her German DECCA catalog is easy to get from the "best of" CD collection; the other half not so much. But after much hunting, my collection is now complete!

The sketch is France in her jeans, purple boots, yellow sweatshirt with "STOP" screen-printed on and Bavarian pigtails get-up she wore when she performed live on the ZDF Hitparade ("Ali Baba und die 40 Räuber" which I also have a HQ track of).
Posted by Tim Fish at 7:00 PM 11 comments:

Riding on the Metro

Also on my DC/SPX trip, one of my late-night ventures on the Metro back to Ryan's place. I had to wait forever for the first train; then I had to wait forever to switch trains. And it was really packed. I was lucky enough to have a seat, and was generally grateful it was a window seat and not an aisle one.

I was specifically grateful for my window seat when this fellow boarded the train: drunk, crazy, or both, he was falling everywhere and drooling brown liquid/vomit into his beard. He was incoherent and smelled. I don't have a good sense of smell, so if I noticed, I know it had to have been awful.

It was a fun juxtopostion to all the giggly sorority girls on the train, or perhaps simply life in the big city.

Oh—sidenote: I was coming from a restaurant and had my left-overs in a to go container, and lots of people were glaring me down. I am reminded that there is NO food or drink allowed on the DC Metro... I heard it was a fine-able offense. But it reminds me of the post "burrito boy" and how disgusted people were at the kid eating on the subway, and how that would have never happened in DC.

Anyone else have a disgusting subway run-in?
Posted by Tim Fish at 8:00 AM 6 comments:

When I was in DC for SPX some weeks back, I stayed with my friends Ryan and Mark. Ryan is a huge John Waters fan (I like John Waters, but Ryan is maybe 5x the fan I am), and took the opportunity to haul out DVDs and clips that I am guessing Mark doesn't appreciate.

Most of the quotes flying and scenes viewed were from Female Trouble, starring Divine as Dawn Davenport: "Nice girls don't wear cha-cha heels!" "Not on Christmas... not on Christmas..." There are so many great lines—what's your favorite?

But here are two drawings of Divine as Dawn. The blue lines on the left are a bit light and I should ink it. I like the effect of the inked drawing over the blue lines to the right... makes her look like she has eyeshadow on.
Posted by Tim Fish at 12:33 PM 8 comments:

Call me old-fashioned if you will! But with the latest bounties and murder storyline in JUSTICE SOCIETY, I must say it: comic book murder is overdone to the point that it's no longer dramatic or powerful. It used to be a real event when something like this happened. Now, it's body parts, entrails and blood everywhere. And, often, there was purpose beyond "death." Take Mister Terrific's murder; the whole suspense point was that no one was on the satellite but the JLA and JSA... so whoever murdered Mr. T was a good guy. Of course, that's not how the story turned out. Go read JLA 171-172 for that. :-) Before I go on, enjoy this sketch of 3 dead heroes (Golden Age Batman, Silver Age Batwoman, and Golden Age Mister Terrific).

So...15 over the course of DC's first 50 years. Happy to update with your edits. In the meantime visit the Wikipedia article of DC's dead heroes for an EXHAUSTING look at the 200+ DC characters (most "brutally slain") in the past 24 years.

Sign of the times, or weak story-telling? Or, I'm old fashioned.
Posted by Tim Fish at 9:04 AM 14 comments: