Didn't mean to leave you hanging! But here's August.

First, I'll remind you that summer is never good for me. I'm not sure if I simply "dislike summer" or if I suffer from SAD in summer (it's real!—go research it!).

Next, I'll say when all one has to worry about is minimizing strife and maximizing happiness, you really don't have a bad life. But when a bunch of rich white men fled the wealthiest nation in the world to become richer, they put some pretty awesome thoughts to paper, which we all want to be true.

To the point, I hurt my back! Actually, I hurt it in summer 2006, moving lots of boxes about at San Diego Comic Con. Ultimately not severe, but it did take weeks to regain full mobility. Since then, it doesn't take much to re-do whatever I did. But when I have, the recovery period isn't terribly long.

Until 7/31, when I was moving furniture about. Yeow, this was the worst since 2006! I couldn't do much at all, but slowly regained my mobility. During this time, I had lots of time to think, and no ability to do—always a bad combination for me.

About a year ago, I started to consider what I wanted to do with life next. I reconnected with old colleagues, career mentors, and talked, and listened. I spun around and around and arrived where I started. Either I can't do what I actually want, so I don't care what I do; or, I don't want to do anything. I mean, at all. Day job feels like a cop out; and whenever I over-invest emotionally there, I'm always miserable. Comics is a dead end; my moment has past and my sensibility is passé...not that I can even draw like I used to.

I'm not being defeatist much either. I was in PT last summer for the pain I was experiencing drawing. I'm in PT again for the other back issues...which seem to have surfaced another issue, all caused from drawing. Perhaps these steps I'm taking will simply allow me to keep  pushing forward. But it all seems a bit pointless.

In the meantime, it turns out that thanks to syndication and cable, you can watch the entire Two Broke Girls run in a few weeks. I don't watch much TV, so this show was new to me, and hit me like a lightning bolt! Where did it come from? When did it happen?

Anyway, I have some more serious thoughts mulling around in my head I may express soon...on racism, on sexism, on feminism, on the election. Let's see if I can pull something coherent together.

But for now, I need to find out if that cupcake business is ever going to take off. 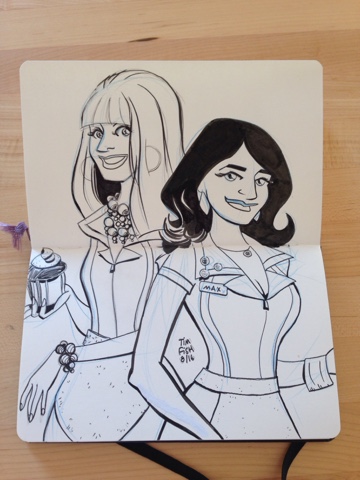